The ACHOKA BOT is an easy-to-use and the most fun learning robot on the digital media market.

It speaks 4 languages, tells a story, plays music, moves on a game board, follows instructions and is a self-correcting aid for children.
The games are divided into 5 learning families: Language, Mathematics, Coding, Sciences & nature, Art.

A team of teachers participated in the development of the games in order to develop the different skills included in the school programs.

The Achoka BOT will also promote the learning of a second language. There are many benefits to learn a foreign language at an early age; such as strengthening brain agility, the ability to understand and to hold a conversation in an other language.

These activities will strengthen their language skills and their appreciation of different cultures. As it’s not always easy to find books in several languages, by using the Bot in an other language than the mother tongue, the child will first listen and then actively participate in the games.

The Achoka BOT is a tool that will also be offered to speech therapists, as followed by exercises carried out during consultations.

The educational interests are:

There will be different degrees of difficulty within the same game, which will allow a positive progression for the child.

A set of instructions accompanies each card or board. The games can be played in workshops of 4 to 6 children or individually. More than twenty games are programmed. This collection of games can be acquired and completed separately from the robot 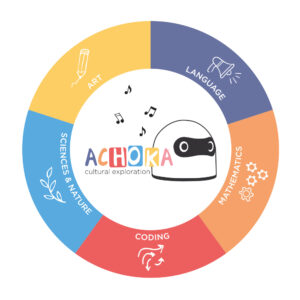